TOP THINGS TO SEE AND DO IN CORK

Kinsale is one of the prettiest seaside towns in a long list of beautiful Irish towns. Its warmth shines through in the rich colour of the buildings and the friendly banter in the pubs. Its rich history and culture are proudly displayed in the museums and historic buildings.

We have so many positive words to describe Kinsale, you would think we’d kissed the Blarney Stone! Here are our top 10 things to do in Kinsale and County Cork during your stay in one of our Exquisite Holiday Homes.

This vibrant university city is a delight to walk around. Cross over the many picturesque bridges spanning the River Lee to visit its fabulous sights. We highly recommend a trip to the iconic English Market in Cork, which has been trading since 1788, making it one of the oldest and finest in Europe. There’s a wonderful display of fresh, local produce and traditional Cork food, including a marvellous array of fish and seafood.

Stroll past the National Monument commemorating the Irish Patriots who died for their country between 1798-1867 and visit the neo-Gothic St Finbarr’s Cathedral with its exquisite mosaics, paintings and stained-glass windows. More than 3,00 Irish and European works of art are inside the historic Crawford Art Gallery building. You can sample delicious local produce in the art gallery’s café.

We may be biased but the best butter in the world comes from Ireland. That’s why we highly recommend you go to the Cork Butter Museum to discover all about the story of butter in the city, and see 1,000-year-old bog butter. Also check out the tower and bells of Shandon at St Anne’s Church as it’s worth going up the bell tower for the views.

About five kilometres from the city centre is the oldest surviving structure still in use in Cork. On the banks of the River Lee, Blackrock Castle is a stunning place to explore more than 400 years of history and open your eyes to the wonders of the Universe in the planetarium.

Go for a scenic walk in Kinsale

As Kinsale is the starting point – or end – of the Wild Atlantic Way, walking along the coast is an exhilarating experience as you will be rewarded with spectacular views along the coast and out to sea.

A favourite walk is the Old Head of Kinsale loop walk. Unfortunately, you can’t walk to the Old Head Lighthouse as it is on a private golf course – unless you join the club, of course.  You can take a bracing walk along the clifftop path from Garretstown beach to the Lusitania Museum and Napoleonic signal tower. It’s just over four kilometres and takes about an hour. So allow at least two hours for the return trip.

Remember to take your camera or have your phone charged up, as the 360º panoramic views are out of this world. You may also spot marine wildlife and birds such as puffins, peregrines and guillemots.

Another popular walk is the Scilly Walk coastal trail from Kinsale to Charles Fort, one of Ireland’s largest military installations. James Fort on the opposite side of the harbour is worth visiting too to get to know Kinsale’s military history.

Start along the Lower Road to the Spaniard Bar and then follow the path along the harbour before going up to the fort. If you return along High Road, known as Kinsale’s Golden Mile, you’ll be peeking at splendid holiday homes owned by millionaires and enjoy super harbour views. The round trip is around six kilometres You can pop into the Bulman Bar or olde world Spaniard Bar for a beer or a bite to eat.

Soak up culture and history in Kinsale

Drinking in the views – and a couple of bars – is bound to have whetted your appetite to get to know Kinsale inside and out.

Head to the Kinsale Museum, inside the Dutch-gabled 18th-century courthouse, for fascinating exhibits relating to its rich history from the Battle of Kinsale to the Kinsale Giant, Patrick Cotter O’Brien who was more than eight feet tall.

Get to know the drink of Celtic Ireland’s Kings and Chieftains by taking the highly-entertaining Kinsale Meadery Tour.

Take part in a hilarious comic ghost tour of Kinsale. Actors Brian and Dave will have you laughing out loud during the tour which starts with a wee drink in the Tap Tavern.

Get the gift of the gab and be able to captivate listeners with your persuasive eloquence after you kiss the Blarney Stone at Blarney Castle. You’ll be in great company as many world leaders and celebrities have kissed the Blarney Stone including Winston Churchill – and look what it did for him!

Head to the waters to go whale watching in Kinsale. During the boat trip, you could see seals, porpoises and dolphins as well as whales. Some whale and dolphin watching tours start in Kinsale while others go from Courtmacsherry harbour to the Old Head of Kinsale.

A great family day out is to Fota Wildlife Park, near Cork, home to exotic animals from around the world including kangaroos and ring-tailed lemurs.

Get your ticket to the Titanic Experience in Cobh

You can also go on the Titanic Trail walking tour to find out more about Cobh’s connections to the Titanic and snippets of Irish heritage.

Just 34 kilometres west of Kinsale on the Wild Atlantic Way is the friendly seaside town of Clonakilty. Voted Best Town in Europe 2017, Clonakilty has beautiful sandy beaches, including Inchydoney beach considered one of the most beautiful beaches in County Cork.

You can also visit Michael Collins’ house to get to know the ‘Big Fella’ better. Michael Collins was an Irish patriot who fought for Irish independence so a visit to his house brings this important piece of Irish history to life.

Clonakilty has its fair share of attractions including the Clonakilty Black Pudding Visitor Centre where you can sample the iconic black pudding, bacon and sausages in the cafe after a tour of the museum.

There are also brightly-coloured life-size animal sculptures in the streets. Time permitting, you can visit the award-winning Clonakilty Distillery to sample its whiskey and gin, or take a trip back in time at the West Cork Model Railway Village.

As well as Inchydoney beach in Clonakilty, there are other magnificent beaches to explore on the Wild Atlantic Way in and around Kinsale. We can recommend:

Get the ferry to Spike Island

Discover 1,300 years of Irish history – some of it dark – at the ‘Irish Alcatraz’, Spike Island. In its past, it has been a prison, fortress, monastery and home. From Cobh, you take a 15-minute ferry ride to Spike Island to explore the prison cells, museums and deep tunnels while getting to know the fascinating and infamous Spike Island characters.

Kinsale is a great spot to pick for a golfing holiday in Ireland. Our top three courses near Kinsale and Cork are:

WhatsApp Chat
Click on the image below to chat with us! 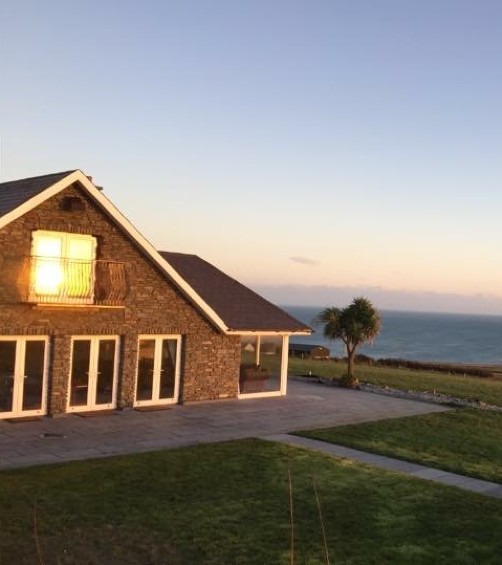 Team Ryan & Barbara O'Leary Available from 08:00 to 21:00 Available on SundayMondayTuesdayWednesdayThursdayFridaySaturday
× How can we help you?